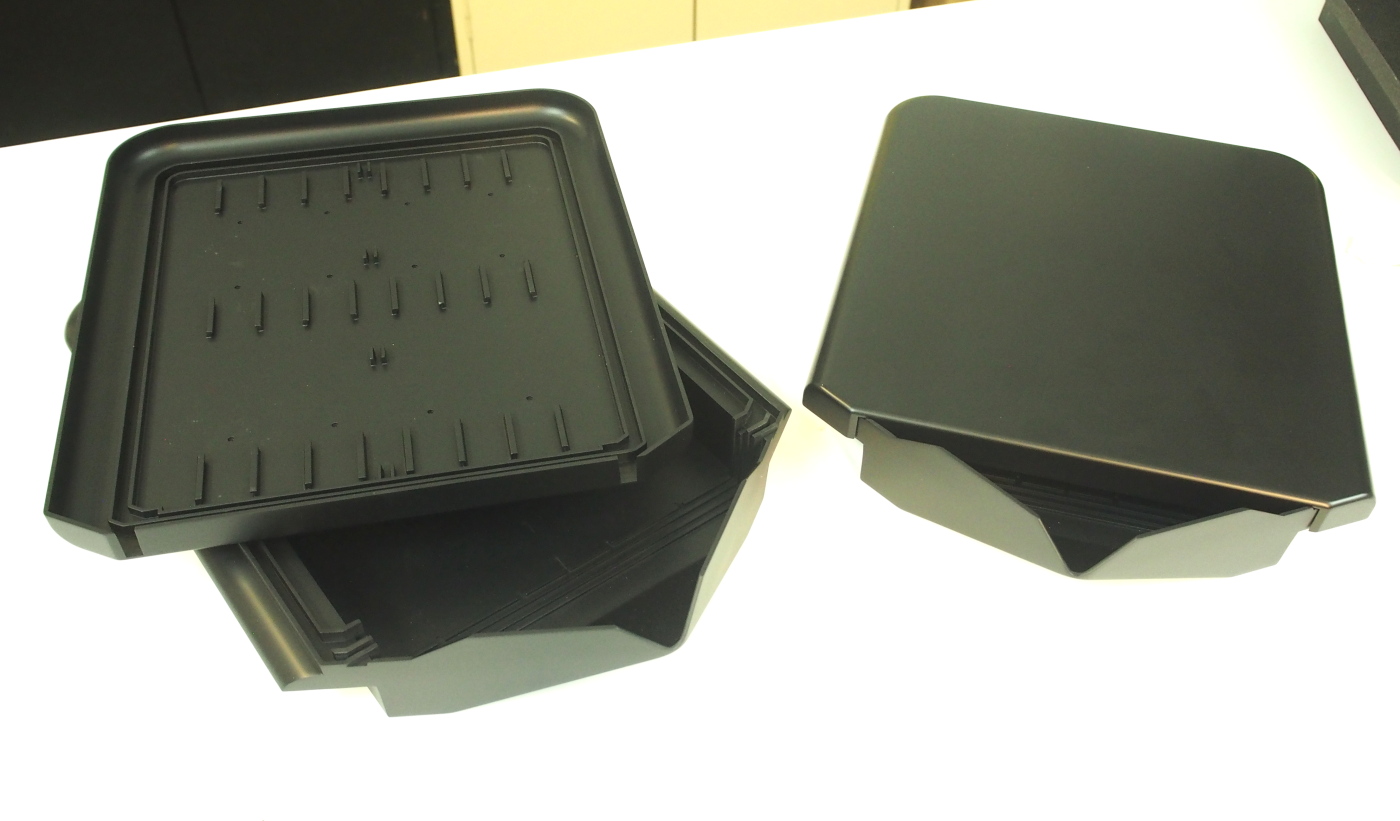 They’ve just finished testing the main mold and preproduction samples will be here next week!

Thanks for your patience.

The crowdfunding campaign was supposed to end at midnight, March 11th.

However, you may have noticed that the countdown timer was still ticking away this morning, clearly in violation of the space/time continuum. (If you had refreshed your browser, it always started over with two days; 01:18:19 remaining.)

Okay, we probably should have noticed the error earlier. To be honest, we find the situation a bit humorous, this is a minor glitch compared to the other problems we’ve had with the software.

If you thought you had two days left to sign up and still want to, let us know.

Frankly, we’re focused on the next prototype and will be publishing an updated schedule soon. And we’ll pay extra attention to the calendar.

About those Hold-Down Tabs:

We’re testing a prototype with the hold-down tabs mounted to the lid. So far it looks good but it complicates the mold. Part of the complication is making the tabs user configurable.

The good news: it seems, (to us anyway) that it’s easier to handle in the dark.

The bad news: it will raise the production cost a bit. We’re now estimating retail will be in the $140-$160 range.

Obviously, this gives people more time to sign up. We’re really close to the goal; almost close enough that even if we don’t technically reach it, the project could still get the go-ahead.

There’s also an engineering reason: the changes we’ve made to the design (moving the hold-down tabs to the lid), means we need to revisit the mold quotes. We don’t expect any major impact to cost or schedule but we want to be sure.

We’re very optimistic that the SP-8×10+ will become reality.

People started asking for a super-sized version of the SP-445 Film System before it was even in production! If you’ve followed our blog and newsletters (you do subscribe, right? if not click here), you know that we’ve attempted several larger prototypes but none of them reached their funding goals. Very disappointing.

In fact, we’re so impressed with the concept that we’ve filed a patent.

Visit our blog for the latest update! 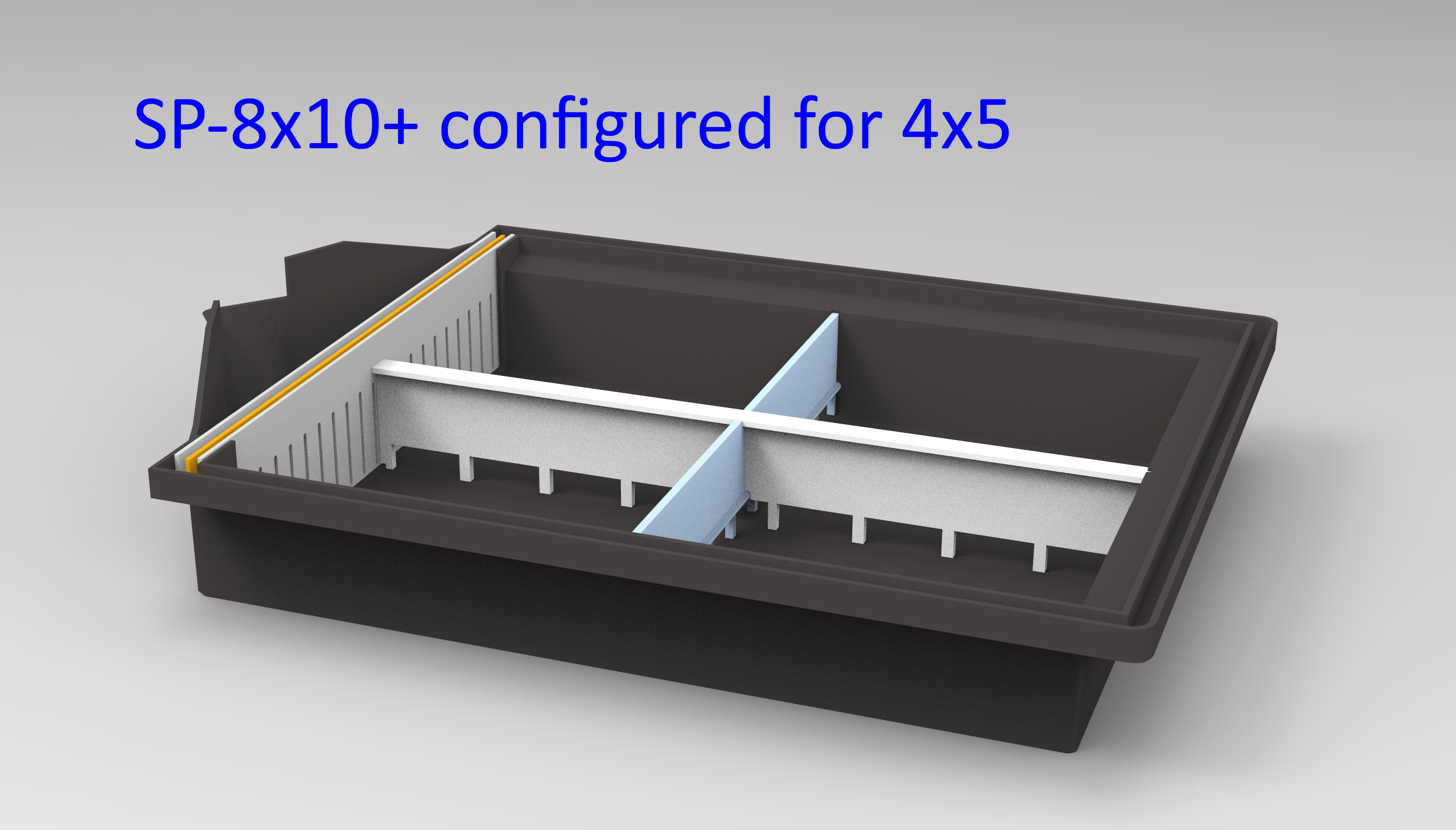 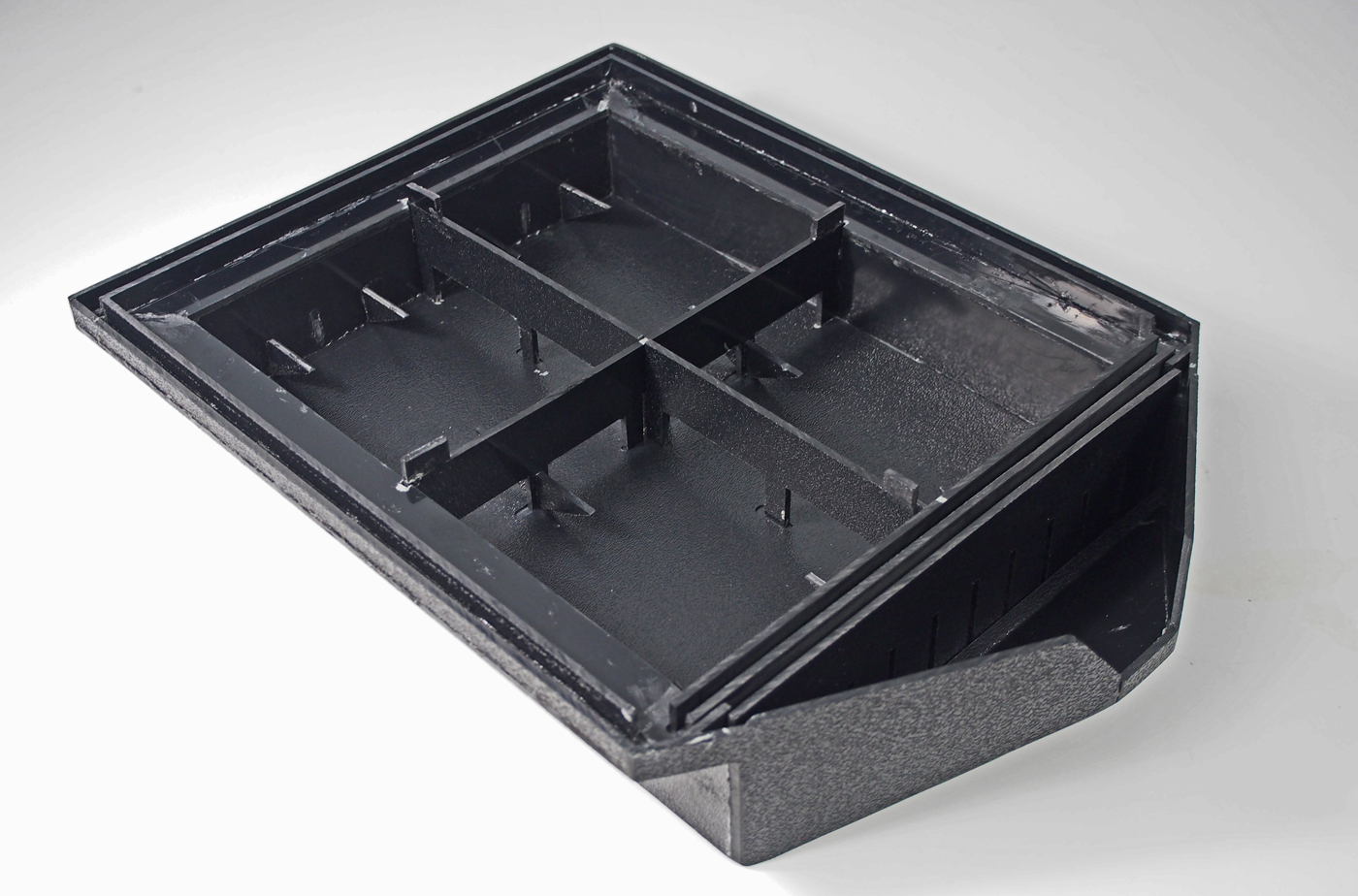 The SP-8×10+ is our sixth or seventh attempt (depending on how you count). We’ve learned a lot:

Help bring the SP-8×10+ to production. Each kit includes:

Other sizes: we suspect that the tray will accommodate 13×18 cm; it will probably handle 9×12 cm as well. However, neither has been tested. In theory, you should be able to process any size smaller than 8×10.

Glass plates: it will certainly handle glass plates. No special holders required. Two caveats: first, don’t tilt the tray too steeply when draining it. You might cause the plates to fall forward. Second, be careful lifting the plates out, you might need a tool of some kind to get under the edge.

Of course, standard disclaimers apply. As we’ve said before, stuff happens and schedules suffer. However, we’re pretty confident that if the campaign is a success that we’ll be in production in May.

Our plan is to ship directly from our warehouse in Hong Kong (and this time iwill come in a really stout box). That would mean arrival at the customer’s address by the end of June.

We don’t foresee any major technical risks. After all, this isn’t our first injection mold! In fact, compared to some of our other projects, it’s pretty tame. But you never know. Stuff happens.

The biggest undefined feature is the hold down tabs. We’ve tried them mounted to the lid as well as to the baffles/side of the tank. Both work fine and the final design (maybe a combination of the two?) will probably be determined by manufacturing considerations.

Regarding the funding goal:

The last scenario brings up an advantage of running in independent campaign: flexibility. For example, if one of our distributors wants to commit to a large pre-order, we can take that into account even if the campaign hasn’t met its official goal.

Please note: Legally speaking, you’re not making a purchase but will receive a “reward” for your support. Just like the big name crowdfunding sites. While this has many implications, the biggest is this: the design may change over the course of the campaign. While we don’t expect anything major, we can’t rule it out. That’s just the nature of product development.

(Please be patient. Data does not update in real time.)

Okay, we knew you were going to ask and we tried. We really, really tried.

It may sound like a lot of money but there are three major expenses to consider. Details here.